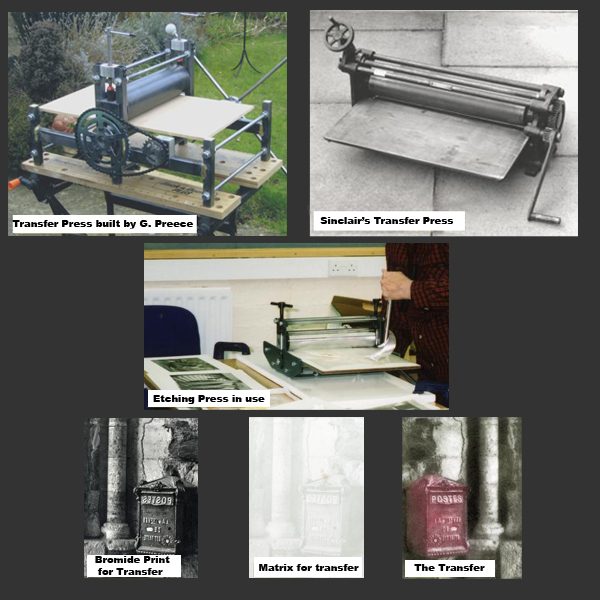 The essential tool for making transfers, of course, is a printing press. Finding the specially designed 1930 presses, by James A. Sinclair’s company of London, or any other make, is almost impossible.
There are alternatives but the most suitable would be an etching press, with which equally good results could be achieved. When contemplating purchasing one, the length of the roller and the width of the bed of the press should be considered. The size of these would determine the size of the receptor paper one could use and finally the image itself. Rudimentary experiments may be tried with ‘spooning’, washing mangles and other adjustable roller devices.

As far as the chemical treatment of the bromide print goes, the preparations for inking are the same as outlined elsewhere. There is, however, a slight difference regarding the inking. The matrix used for making a transfer should be inked with slightly greater contrast. It is important to keep the highlights very clean; the shadows, however, should be more heavily inked than in an ordinary Bromoil print. This is done because every pigment particle in the ink from the highlight areas will transfer onto the new support paper with ease, whereas only about 80%-90% from the shadows. Without sufficient contrast the transfer print will look dull and tonally degraded.

Once the inking has been completed, before a transfer is made, the matrix should be soaked for about 5 minutes. This will facilitate the release of the ink from the matrix. Before the pull is made, all surplus water must be removed from its surface. The receptor paper could be any good quality watercolour paper, preferably hot pressed (smooth), or makes of paper traditionally used by print makers.

Press Pressure
The pressure of the press will have to be adjusted depending on the thickness of the pack that will be pulled through. The make up of the pack, referred to as the sandwich, may differ from one worker to another, but here is an example that has given good results. It is made up as follows: a thin card, larger than the receptor paper, forms the base. Placed on top of it is the watercolour paper and then, face down, the inked matrix, all in a staggered fashion. This pack of three is placed between two firm Acetate sheets. These should be glued together at one end, along the shorter edges. The sandwich is then placed on the bed of the press and pulled through slowly, without stopping and as smoothly as possible.

It is hoped that a satisfactory transfer with the first pull has been achieved showing all the desired detail and tonalities. As mentioned earlier, clean and sparkling highlights and deeply rich blacks are desirable. Should the image lack these elements, the print can be discarded and the matrix prepared for a second pull. For this, after a short soak, the matrix is re-inked. As before, attention should be paid to the highlights and shadows, particularly to the latter. These should receive plenty of ink.

The residual ink, that had remained on the matrix after the first pull, facilitates the release of the ink from the shadow areas when the pack is going through the press the second time. The sandwich could be taken through the press in both directions to ensure more of the ink gets transferred. There is, however, some danger of losing sharpness in the print. The pack may have shifted-out of register on the return journey.

Aiming to Improve Results
A technique of several inkings and pulls from the same matrix onto the same support paper (multiple pulls) is practised by some workers. With the repeated soaking the expansion of the paper can vary. This will depend on the temperature of the water and the length of time of the soak. Good results would always depend on finding a reliable method of registration. One way of achieving this is to draw 4 pencil lines on the back of the matrix after the first pull and before the matrix and the support paper are separated. The marks should be lengthened beyond the outer edges of the matrix onto the receptor paper.

Even more reliable results can be achieved when a damp matrix, prior to inking, is stretched by taking it through the press, also when a damp receptor paper is used. A close study of the behaviour of the papers used should be made. It is advisable to introduce standardisation in one's working methods thus minimizing variables to avoid unpredictability. It must be mentioned that the multiple pull technique is often used in colour work with great success.

Finally, one can only add that the end result, the Bromoil Transfer, liberated from all the materials used in photography, must be considered as a print in its truest sense and equal to any produced in the different printing processes. It has gained greater permanency than a Bromoil and an additional enhancement through the use of a beautiful hand made paper of one's choice.
Next
Previous